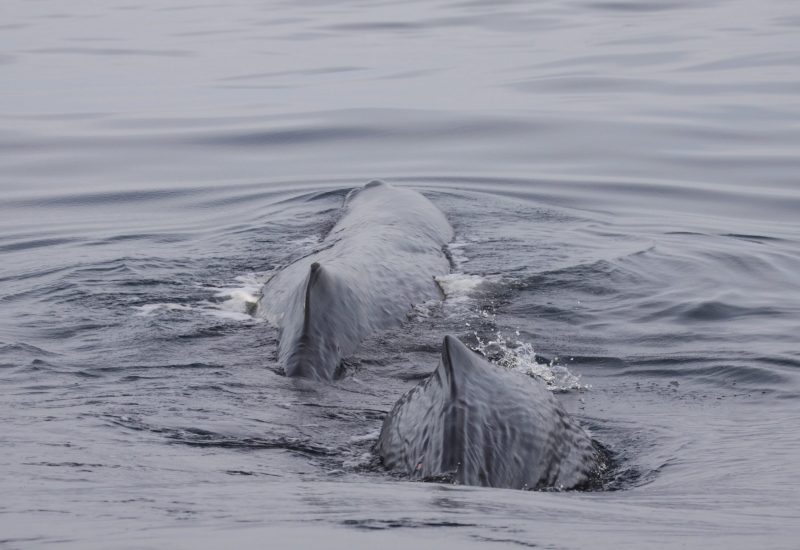 Athens, Hamburg, Zurich – 27 January 2022. A leading shipping and logistics conglomerate, MSC Group, is the first major shipping company to re-route their ships on the west coast of Greece to reduce the risk of collision with endangered sperm whales in the Mediterranean. The decision was made after a coalition of environmental NGOs approached MSC Group to move their ships away from critical habitat for this subpopulation of whales, of which only 200 to 300 individuals remain.

The International Fund for Animal Welfare (IFAW), OceanCare and WWF Greece are working in collaboration with the Pelagos Cetacean Research Institute, which has been studying the eastern Mediterranean sperm whale population since 1998. These studies have identified the Hellenic Trench, to the west and south of the Peloponnese and southwest of Crete, as critical habitat for these whales. These deep diving whales are found here year-round – the only area where family groups have been observed in the eastern Mediterranean, and they concentrate around the 1000m depth contour – directly in the path of busy shipping routes.

“As a global leader in container shipping and logistics, we have a responsibility to ensure that our cargo operations make a positive impact, reflecting our longstanding commitment to conserving and protecting the ocean and marine wildlife,” said Stefania Lallai, Vice President of Sustainability at MSC Mediterranean Shipping Company. “Collaborating with NGO partners is key to understanding and taking action to protect endangered sperm whales along the Greek coast.”

“MSC Cruises is committed to supporting the health of our oceans and working closely with experts in the field to identify and implement meaningful action is how we can best do this. We are pleased to support this initiative, recognising that with small changes in our routings we can support the conservation of this important sperm whale population,” said Linden Coppell, Director of Sustainability at MSC Cruises.

The area of most concern is currently a major container shipping route, making this re-routing a substantial contribution to the survival of these at-risk whales. MSC Cruises’ vessels also make use of this east Mediterranean route to travel to Greek destinations and, following detailed discussions based on the scientific research, slight modifications have been made to routes from mid April to October when these cruises operate.“The whales found dead on the shore with propeller marks and cuts are just the tip of the iceberg. Up to 20 times more die offshore and are never recorded. We are also seeing fewer whales in our yearly research surveys than in previous years, which is a huge concern”, explains Dr. Alexandros Frantzis, Scientific Director of the Pelagos Cetacean Research Institute. “It is our fear that without urgent action, deaths through ship strikes will cause this already small population to go extinct very soon”.

“By making small re-routing changes, MSC is making a significant difference for these endangered whales. This population is at risk and even one ship strike is one too many. Now we need other shipping companies to show similar leadership – if all ship traffic using this area made these minor adjustments, the ship strike risk to sperm whales would be reduced by almost 75 percent,” comments the NGO coalition. “Ship re-routing is required now to change the course for sperm whales in the eastern Mediterranean”.

More than half the sperm whales found stranded on the Greek coast show evidence of vessel collisions, known as ‘ship strikes’. This is the highest proportion of deaths caused by ship strikes that is known of for any whale population globally. Most collisions are fatal but some live animals carry scars from encounters with ship propellers. Evidence from other areas shows that only a very small proportion of ship strikes are detected and reported. In many incidences, mariners on large ships are unaware that they have hit a whale.

Earlier this year, the Greek Ministry of Defense through the Hellenic Hydrographic Office in collaboration with the Ministry of Maritime Affairs and Insular Policy and the Greek shipping industry issued an official notice informing mariners about the presence of marine mammals in the Hellenic Trench. The NAVTEX (NAVigational TEleX) warning instructs mariners to look out for whales and try to avoid collisions with them.

Sperm whales (Physeter macrocephalus), well known from the legendary tale Moby Dick, belong to the group of toothed whales and can dive to around 2000 metres. Male sperm whales grow to around 16 metres long (some individuals even up to 20 metres) and can weigh up to 41 tonnes. Outside of the Mediterranean, sperm whales are listed as ‘Vulnerable’, butdue to its small size and geographic isolation, the Mediterranean population is listed as ‘Endangered’ on the IUCN Red List of Threatened Species.

The NGO coalition working on this issue consists of the International Fund for Animal Welfare (IFAW)(www.ifaw.org), OceanCare (www.oceancare.org), the Pelagos Cetacean Research Institute (http://www.pelagosinstitute.gr) and WWF Greece with the support of the WWF network (www.wwf.gr).

For more information or to arrange interviews please contact: